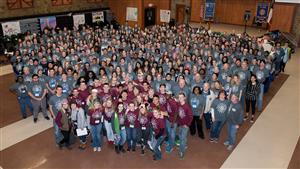 A total of 273 high school juniors attended from all over Rotary’s District 5910, a territory in East Texas encompassing communities such as Nacogdoches, Palestine, College Station, Conroe, Cleveland, Galveston, League City and all of Southeast Texas. The camp took place at Piney Woods Baptist Camp in Woodlake, Texas, and was led by over 60 Rotarian volunteers from across the District including seven Rotarians from the Rotary Club of Beaumont. Students from BISD were sponsored by the Rotary Club of Beaumont and the Spindletop Rotary Club. They were chosen through a selection process that involved nominations by school counselors, a written application with essay questions and a grading system utilized by a committee of local Rotarians.